About the Service Flag 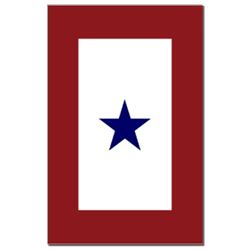 The Service flag is an official banner authorized by the Department of Defense for display by families who have members serving in the Armed Forces during any period of war or hostilities the United States may be engaged in for the duration of such hostilities.

The Service flag, also called the Blue Star Flag, was designed and patented by WWI Army Captain Robert L. Queisser of the 5th Ohio Infantry who had two sons serving on the front line. The flag quickly became the unofficial symbol of a child in service.

President Wilson became part of this history when in 1918 he approved a suggestion made by the Women’s Committee of the Council of National Defenses that mothers who had lost a child serving in the war wear a gold gilt star on the traditional black mourning arm band. This led to the tradition of covering the blue star with a gold star on the Service flag to indicate that the service member has died.

During WWII the practice of displaying the Service flag became much more widespread. Most flags were hand made by mothers across the nation. One of the most famous flags was that of the five Sullivan brothers who all perished on the U.S.S. Juneau.

The Service flag may also be displayed by an organization to honor the members of that organization serving during a period of war or hostilities.

The Service Flag is an indoor flag and should be flown facing out from the front window of the home or organization.

Each blue star on the flag represents a service member in active duty.

Display of a Service Star Banner is done during times of war. Once again families are displaying banners at home. Blue Star Flags may be purchased through the internet, at stores, or made by hand.

A gold star is displayed if a service member is killed in action or dies in service.

If several stars are displayed by one family the gold star takes the honor of being placed at the top.

The gold star should be slightly smaller than the blue star to create a blue border surrounding the gold star.

What is the latest

There are no upcoming events.

Hello and welcome!  I am Rhonda Kuebler and I have the honor to serve as your chapter chaplain.

Thy word is a lamp unto my feet, and a light unto my path. Psalm 119:105 … END_OF_DOCUMENT_TOKEN_TO_BE_REPLACED

Help Us Help Them